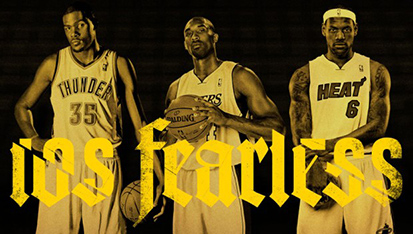 The Black Mamba owns Los Angeles.  From his fourth Most Valuable Player in the 2011 NBA All-Star Game to the billboards hanging on La Cienega to his golden visage staring down from the walls in the Foot Locker House of Hoops in the Beverly Center, Kobe Bryant is an icon that people look up to and try to emulate . . . and in steps Lensley. Over the NBA All-Star Weekend, Lensley Automatic set up in the Beverly Center, capturing people and making them into NBA icons like Kobe.  Bathed in the same golden tones with the Los Fearless logo splashed across their chests, people got to hold basketballs and show off what they would do if they were on the court.  In the House of Hoops, people were projected larger than life, with three 60” screens rotating through thousands of photos, and a 3-story, 100’ looming projections over the crowds of All-Star Weekend in the middle of the Beverly Center! Los Fearless and Lensley made icons of us all!